A terrifying account of emergency adhesiolysis 10 years after a gastric bypass. 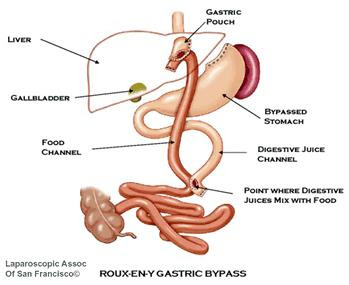 Bowel obstructions in Roux-n-Y gastric bypass patients always make me a little nervous. As opposed to garden variety, adhesion-mediated obstructions in people with normal anatomy, conservative treatment often fails in these patients. For one thing, you cannot adequately decompress them with nasogastric suction. Furthermore, the incidence of internal hernias is much higher, owing to the altered anatomy of the procedure (roux limbs and split mesenteries etc). So going into these cases, your threshold for surgery has to be exponentially higher than normal.

The scan above shows a subtle spiralling of some small bowel mesenteric vessels in the area where one would normally find the jejunojejunal anastomosis. Single views don't do the pathology justice; you really have to be able to scroll up and down through the loops of bowel on the scan. The patient looked uncomfortable, was tender, and I just didn't feel like dicking around for much longer. So I explored her in the OR.

She'd had two previous surgeries, prior to her gastric bypass even, for bowel obstructions secondary to an old hysterectomy, so things were pretty confusing, anatomically speaking, when I first entered her peritoneal cavity. The jejunojejunostomy appeared to be corkscrewed. That was clear enough from the beginning. Then I identified a decompressed limb of bowel going up to the gastric pouch (roux limb, a ha!). And then it looked like a bunch of small bowel had slipped through a space between the roux limb and the transverse mesocolon---classic Petersen's defect. Unfortunately, however, the bowel didn't want to slide back out of the space right away. It was stuck somewhere else further downstream. So I basically had to perform a full adhesiolysis of bowel, starting from terminal ileum and working back. To keep things organized, I literally had to place identifying stitches in the serosa of the proximal bowel as I flipped things back and forth. A couple of times it got a little hairy as the bowel started to turn bluish and I had to reverse my maneuvers, untwist things the correct way. Finally I freed everything up and the bulk of the small bowel was liberated, came rushing out from behind the defect. Looking down, the J-J anastomosis was normal again, the corkscrew configuration gone. I closed the defect, put in some voodoo-ish anti-adhesive Seprafilm and got the hell out.
Click on link to see imaging and read comments:
http://ohiosurgery.blogspot.com/2009/12/petersons-defect.html
at 2/10/2011 11:34:00 AM