New Wound Closures Get Seal of Approval
By P. Driscoll
From January 2008 issue of MedMarkets, with excerpts from “Worldwide Wound Management, 2007-2016,” report #S145.

The market for surgical sealants is expected to grow in double digits over the next five years as aging populations drive increases in caseloads (see chart below). In addition, less morbidity and better outcomes are seen with the latest fibrin sealants, high-strength glues and adhesion prevention products, thus spurring increased adoption of these technologies over traditional wound closure methods.
There are several main categories of closure and securement devices in use in the OR: sutures and staples, tapes, hemostats, fibrin glues and sealants, adhesion prevention products, and soft tissue attachment products.
Some leading companies in the modern wound closure market established their leadership positions when the market consisted exclusively of sutures, staples and tapes; others are new entrants based on expertise in areas such as adhesives. While the fibrin sealant market segment is dominated by Baxter Healthcare and CSL Behring, the high-strength glue segment is led by U.S. Surgical (now part of Covidien), Ethicon, and Aesculap (a B. Braun company). Key players in the market for adhesion prevention products are Ethicon, U.S. Surgical and Genzyme. Market shares for these companies are shown in the charts, “Leading Companies in the Sealants Market by Market Share.”
Leading Companies in Sealants Market by Market Share 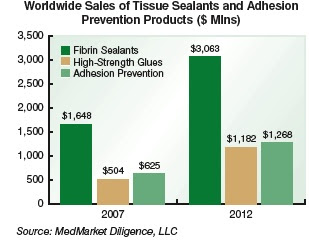 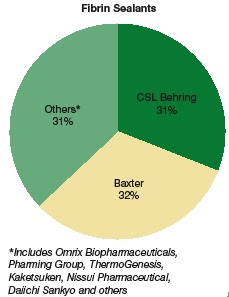 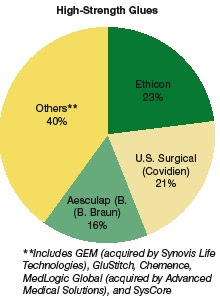 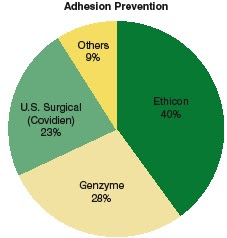