Welcome to the Twilight Zone & Endogyn

Kru posts> "Professor Charles Koh, an outstanding and world-known surgeon visits to watch Lift-Laparoscopy and adhesiolysis surgery. Yesterday we picked him up from Munich Airport and today we demonstrated for him one case of gasless laparoscopic adhesiolysis on a lady from Ireland and a case of Lift-laparoscopic hysterectomy."

IHRT> "Koh is from Milwaukee, Wisconsin, and not all that well known. And he had to go to Germany to see a lift surgery????"
(Did any of you know of him?) 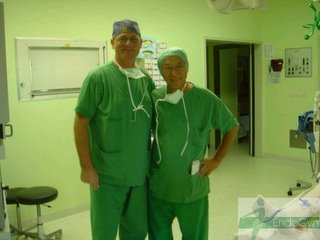 IHRT says> This sure looks like the Emma Klinik to IHRT, and is not at all equal to the sharpness of the othetr two photos taken of this visit to....where ever! Notice no mention of the facility that this visit took place in? (And from a man who went as far as to exploit his patients for fame not telling where this surgery took place with such a renowned visiting surgeon no less!..RIGHT Kru!)

Kru posts> "He was impressed and wants to adopt the technique for his tubal anastomosis surgery. "

IHRT says> Koh won't use that hook in Wisconsin! They are not that stupid in Wisconsin to allow someone to hang them on a meat hook! Brats, yes, People no!

"If Koh is impressed by Kru, then Koh needs to get out more!"

We is all impessed with you, Kru! You the man! We love ya, man!

Kru posts> "While mixing the SprayGel.."(Why? It didn't work in Kru's hands anyway!) 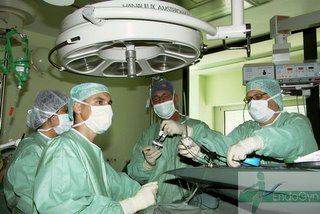 IHRT asks> "What happened to Koh? Where is he?" No Koh in this shot! Did he go out for lunch or what? Bored perhaps! One can be "world-known," but not in Krus operating room! But then again, THIS OR looks firmiliar to IHRT too! Hmmmm, this is getting more curious all the time!"

IHRT notices that THIS "high tech operating room" seems to have a few "flaws!"

Lets see now, it has some pretty jagged edges for a high tech look, and, oh yeah, that "center peice" is cut and pasted and inserted wrong! To much shading in the middle of the picture, and that fold line down the center, well, they really make this picture look as bad as Katzers "nursing" documents! (Below)

Ihrt says> Yup, once again it appears that Kru didn't hire a proffesiona forger, instead thinking he is forge king, he creates a really flawed looking presentation of what he wished life were really like for him.

As anyone , but Kru, knows is if you crap in one hand, and wish in the other hand, which one will get filled faster?

All pictures here are property of

Except the "high tech operating room" picture above, that's not! Just Kru's poopy pictures are!! (Kru is in the 2nd picture here! The poop is the 4th picture! Don't want to confuse anyone, especially Kru as he seems to be getting more and more confused at every post!)

"Kru" (in center of picture below) hasn't a clue, about any of this does he! Kru's losing it, he's really losing it! Too many miss-spelled words in his posts and now this junk, gee, IHRT is getting bored, no wonder Koh left early! 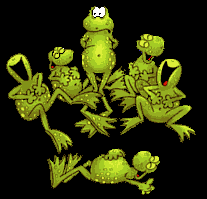 Kru & Katzer> "This is Katzer's 'nursing" certificate!" Now this should prove Katzer is a nurse!" 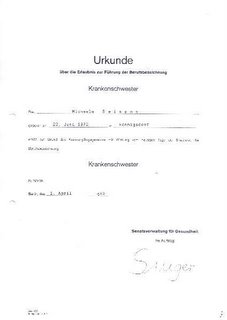 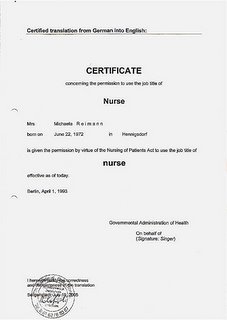 -born in Berlin 22.06.1972 - 1989 - 1991 Nursing certificate, Berlin - Employment on urological and surgical departments - from 1997 Registered OR-Nurse in general surgery, gynecology, first insight to laparoscopic surgery - from 2001 at EndoGyn® with specialisation on gasless laparoscopies - with the function of the first assistance at endoscopic surgeries - Experience in assisting at live surgeries, in India, Mexiko, Spain - since 2002 OR-Management at EndoGyn® with the function: Coordination of OR personell, Organisation and coordination of OR planing, Coordination of Devices, Instruments, - Planing of new EndoGyn® - centers

Then here is Katzer's second CV to match the "translation" of the "nurse" document!

- born in Berlin 22.06.1972 - 1991 - 1993 Nursing certificate, Berlin - Employment on urological and surgical departments - from 1997 Registered OR-Nurse in general surgery, gynecology, first insight to laparoscopicsurgery - from 2001 at EndoGyn® with specialisation on gasless laparoscopies - with the function of the first assistance at endoscopic surgeries - Experience in assisting at live surgeries, in India, Mexiko, Spain - since 2002 OR -Management at EndoGyn® with the function: Coordination of OR personell, Organisation and coordination of OR planing, Coordination of Devices, Instruments, - Planing of new EndoGyn® centers

More alias's then one would want a nurse to have, but then again she isn't a nurse at all, come to find out!

Kruschinski mistress working in his OR, fraudulant documents, Endogyn closed, bogus surgery claims, irrational posts up to 100+ times a day, (and at the same times he claims to be doing surgeries no less) miss-spelled word galore, ramblings, rantings, ravings that make no sense, robbed the cradle for a mistress, dumps his own children, no phone, no office, using a web cam for patient exams, telemarketing, no hospitals to do a surgery in, no friends, no family, no money, all equil one thing =

Kru is simply a nothing existing only in his mind in

Nice summary of lots of evidence of document tampering, falsification of OR photos, etc.
This guy is scary!
Ziggy

All "bullshit" what is written here. Hope your kids fall into the poop... hi,hi,hi
Shit is greating the FAT witch and friends...
A fan of Kru from middle of Germany

This slander is going way to far!!!

Imagination is good, but this seems to be taken from the last hideous place a human beeing can think of!

P.S.:IHRT don't confirm yourself under the names of others, this makes you look like fool talking to yourself in a lunatic asylum!

This SLANDER is going way to far!

I mean, imagination is positive, but these words seem to be taken from the most abominable dream a human beeing can dream.

Go to the doctor with you presumptions! He will send you to a quiet and bonny place, called the lunatic asylum!! There it doesn't mind talking to yourself!
Or you should think of an end-of-the-world-theory and try to spread the word!

Oh fer goodness sakes Daniel....
Ya big baby.
Dish it out but can't take it.
Why don't you use your time more wisely?
Do some scientific research or go grifting somewhere or something.
More dreadful behavior from dasterdly Dan.
Daniel, only the few left in your crew believe an ol nurse and an ol chef are the source of all your problems.
Everyone else is laughing at you.
Going totally insane here for over 10 hours????
Your a loser baby.